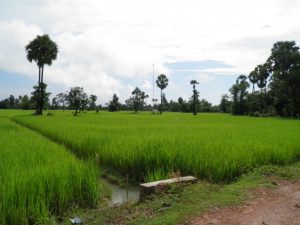 Films matter for people’s understanding of historical events, particularly helping people understand situations which are so far removed from their everyday experiences that they are nearly incomprehensible. “Hotel Rwanda” has strongly shaped popular perceptions of the genocide in Rwanda, while “Schindler’s List”, “Inglorious Basterds”, “The Boy in the Striped Pyjamas” and others have substantially contributed to the popular imagination of the Holocaust. Most of these films have been critiqued significantly for various reasons related to their historical authenticity, their Hollywood sensationalism or restrictive perspectives, but their impact on popular discourse and understandings is indisputable.

In this context, “First They Killed My Father. A Daughter of Cambodia Remembers” is a new film intervention in the memoryscape directed by Hollywood superstar Angelina Jolie and co-written by her with genocide survivor Loung Ung, whose story the film tells. The production for Netflix will most likely allow for broad swathes of the international public to come into contact with this important period of Cambodian history for the first time. The film allows the viewer to see the unfolding of the Khmer Rouge regime through the eyes of Loung Ung as a young girl. The audio of the film is in Khmer with sprinklings of French, subtitled in English, and this seems to suggest a degree of authenticity. And indeed, the film does succeed in capturing the everyday experiences of people living under the Khmer Rouge regime.

Before coming to the story of Loung Ung and her family, the film sets the scene by portraying the US bombing of Cambodia on the fringe of the Vietnam War. This beginning is important as it explains to an audience who may be new to the topic the complicity of Western powers in destabilising this country, as well as showing the horrible experiences that allowed the Khmer Rouge to become so strong. After this the story of Loung Ung unfolds slowly and gradually. Interestingly, the true horror of the regime is not immediately clear, and the viewer only comes to understand what is happening bit by bit as the protagonist discovers this herself, allowing the viewer to experience the Khmer Rouge regime as it emerges.

Eventually, Loung Ung is recruited to become a Khmer Rouge soldier herself, then also wearing the emblematic red kroma, a traditional scarf. The film continues to portray her as a victim of the regime, as she is, but her recruitment highlights the complexity of roles that people took on during the regime. Many people were victims and perpetrators at once in this incredibly coercive environment. That the film manages to bring in these nuances of responsibility, agency and victimhood so succinctly is important for an understanding of this period.

It remains to be seen how this film will be received by the film-watching public, but I would hazard a speculation that it will significantly impact the global public discourse on the Khmer Rouge genocide for years to come. The popular imaginary of this dark time in Cambodian history will likely become more widely recognised, and with Jolie’s well-crafted film important nuances of history and Cambodians’ experiences can enter into this understanding.