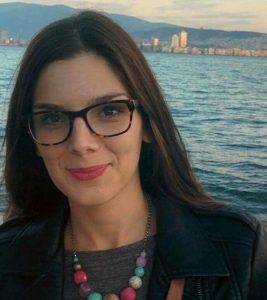 We are delighted to welcome guest blogger Maja Davidovic to our website. Read her thoughtful piece on the promise of ‘Never Again’. She asks: what are Bosnia and Herzegovina’s or any other state’s obligations to provide (or offer) guarantees of non-recurrence after a conflict? Where do these obligations originate from and, importantly, do local people act as consultants in these processes? These questions touch upon some core issues to do with memory politics and peacebuilding.

Maja Davidovic is a Ph.D. candidate at Durham University working on guarantees of non-recurrence in transitional societies. She is an alumna of the Human Rights M.A. program at Central European University and has previously worked with migrants and refugees as a researcher and field officer in Serbia, Bosnia and Herzegovina, and Greece. 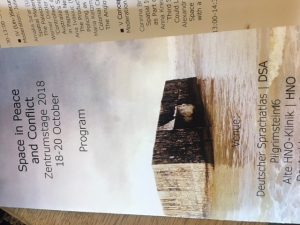 In October, Professor Susanne Buckley-Zistel organized a conference on the theme of Space in Peace and Conflict. All members of this research cluster participated. Susanne Buckley-Zistel moderated the opening panel on ‘Interdisciplinary Spaces’, Stefanie Kappler, Johanna Mannergren Selimovic and Timothy Williams participated in a panel on ‘Spatialising Memories’, and Annika Björkdahl held the closing keynote entitled ‘A Spatial Turn in Peace and Conflict Research’.

Check out the program here:  SPACE IN PEACE AND CONFLICT

In 12-15 September 2018 we all participated in the 12th Pan-European Conference on International Relations in Prague, organized by EISA, European International Studies Association. We organized a panel on the theme of ‘Memory, Materiality and the Cultural Heritage of Conflict’ and Professor Annika Björkdahl participated in a roundtable on the theme of ‘Memory and the Politics of Hope’.

We have the pleasure  to publish a Working Paper on art in the public spaces of Sarajevo, Bosnia-Herzegovina. Curator Danijela Dugandžić analyses a number of fascinating artworks that since the official end of the war in 1995 have dealt with some key themes: nationalism, the role of the international community during and after the war, forgotten emancipatory history and heritage, and post-war reconstruction. There has also been a significant production of feminist art.  Dugandžić shows how art can be  an urban practice that uses public space as emancipation for those who are less visible, or even invisible.

Working Paper no 2. Politics between Art and Space. Sarajevo after 1995. 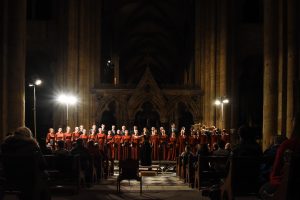 On 5 March 2018, we hosted the interreligious choir Pontanima from Sarajevo at Durham University. Pontanima are known as an important peace-maker in post-war Bosnia-Herzegovina, composed of members from different ethnic and religious groups and performing songs from Bosnia’s different religious traditions (Jewish, Orthodox, Islamic and Roman Catholic). Through this, they send a powerful message of appreciating diversity and reconciliation. The eclectic elements of Bosnia-Herzegovina’s religious heritage are thus understood as an asset and precondition in which the trauma of the war can be overcome – based on a memory of Bosnia-Herzegovina as a multicultural nation.

Nedžad Avdić from Srebrenica was travelling with the choir on their UK tour (Cambridge, London, Durham). Nedžad is a survivor of the atrocities that were committed in Srebrenica, having been shot multiple times and witnessing the killing of many others. By telling his personal story, Nedžad is trying to raise awareness of the detrimental consequences of hate of any kind. He says that he had returned to Srebrenica to “show them I am still alive”.

In that sense, one might think the combination of the choir, which emphasises a notion of reconciliation, and a survivor who expresses the need to remember the atrocities, may seem unusual. Is this about retribution or reconciliation?

But it is exactly that that Nedžad Avdić’s story and the choir may be read as: namely the need for suffering to be acknowledged so reconciliation can happen. Independent of which side the suffering has happened, it seems to be crucial for pain and injustice to be recognised and taken seriously if they are to be transformed into a creative energy (such as music, with the example of Pontanima). This does not mean that we need to look at reconciliation as a linear phenomenon or with a clear directionality (suffering > acknowledgement > reconciliation), but instead to recognise the importance for personal testimonies to be listened to throughout.

Peacebuilding, I would suggest, should therefore create spaces in which suffering can be acknowledged. Those spaces can then give rise to conversations and transformations, where the arts can deploy their special impact. This is not to say that acknowledgment alone is sufficient to overcome societal divisions (indeed, a critique that has often been voiced against the South African Truth and Reconciliation Commission has been its lack of focus on material reparations for the victims of apartheid). Instead, it means to engage in a serious conversation with those who want or need to remember and have felt the impact of war on their own lives. 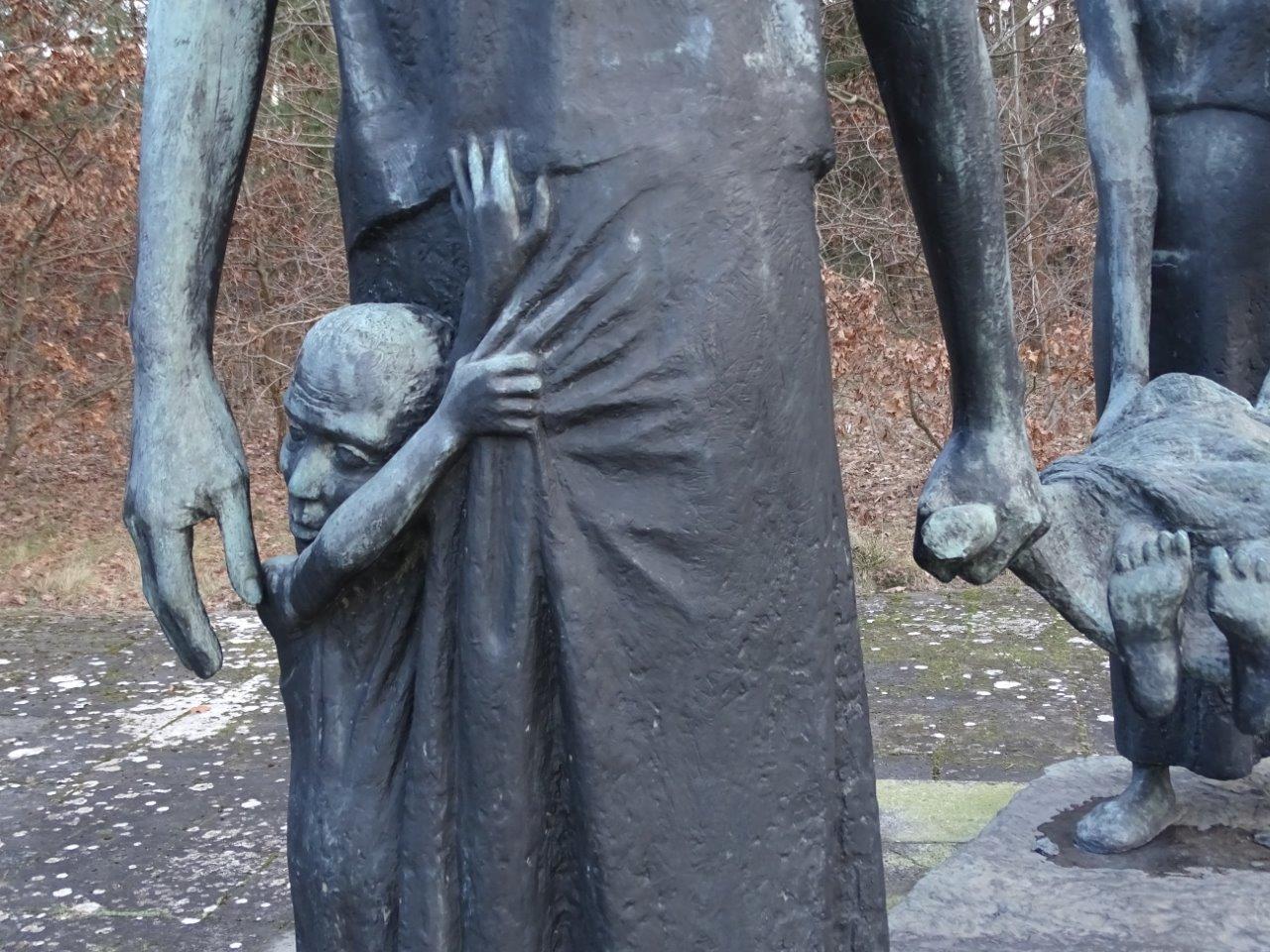 When it comes to analysing the memorialisation of the past, Berlin has much to explore. The city is interspersed with sites that commemorate various victims groups of National Socialism and the German Democratic Republic: the
Memorial and Information Point for the Victims of National Socialist “Euthanasia” Killing, the Memorial to Homosexuals persecuted under Nazism or the Memorial, the Berlin-Hohenschönhausen Memorial, the Memorial to the
Murdered Jews of Europe, to name but a few. Berlin’s memorials also pay tribute to moments of resistance, such as the German Resistance Memorial Center, or to perpetrators such as the Topography of Terror, adding to the diversity of the memoryscape.  These photos from a recent visit convey the kaleidoscopic array of different memorial and education attempts which compete and coalesce in remembering the Nazi past.

Timothy Williams participated in a conference organized by Historical Dialogues, Justice and Memory Network, at Columbia University in New York City, 7-9.12.2017 and presented the paper “Transnational memory and digital spaces. A comparative study of web-based reactions to genocide memorials”.

The Second Annual Conference of the Memory Studies Association is to be be held in Copenhagen, 14-16 December 2017. Annika Björkdahl and Stefanie Kappler will present a paper entitled Professionalising or commercialising the transnational experience? Memory as a political and economic resource (Panel 3, Memory in Transition). Johanna Mannergren Selimovic  will present a paper entitled Massgraves, Memory and the Presence of Absence (on Panel 18, Amnesia and Failed Memory). Check out the exciting program.