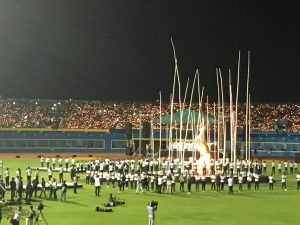 The 7 April is one of the most significant dates in Rwanda’s official calendar. This is the day that the genocide began in 1994 and today it is national holiday marking the beginning of a period of commemoration and mourning calledKwibuka– meaning to remember in Kinyarwanda. Kwibukalasts a full one hundred days – the duration of the genocide. While many of the official events happen in the first week, various commemoration events are organised around the country on the specific dates significant to that place, normally when the massacre of the local Tutsi population took place.

Participating for the first time in Kwibuka events this year, I was struck by the eclectic mix of formats integrated into these events. Before travelling to Rwanda, I had been expecting emotionally charged events that focus strongly on survivor testimony. Most events I visited did indeed also include one or two testimonies by survivors. However, the commemorations are also highly official events that are planned down to the minute with sometimes a dozen speeches, always including a lecture on the history of Rwanda, as well as speeches by the most important dignitaries present. These are then complemented by sermons by local clergymen, when it is a religious commemoration event (given the loci of much of the killing in and around churches this is quite common), or by official Kwibuka songs sung by bands or choirs. Unsurprisingly, with the official nature of these commemorations come the practices and conventions typical of such events with long speeches, the pleasantries of dignitary speeches and the inevitable delays until the most important officials arrive with hundreds of survivors and other visitors waiting, often in the hot midday heat.

By my cursory observation it seemed that the testimonies were the most significant parts of these commemorations, even if they were difficult for other survivors to hear and sometimes re-traumatised one of the listening survivors. They are of deep relevance to many survivors as they can relate their own experiences to them and it renders their own memories significant. It seemed to be cause for regret that there were not more testimonies, and attention dwindled during the more official speeches.

Noticeably absent from many of the events were the younger generation. It is possible that the official format and the sheer length of the events proves too daunting to young people. A different picture emerged at a theatre and dance performance by the performance group Mashirika. Gisozi amphitheatre was packed with young people, crowding in, sitting on steps or any space they could find. The modern dance and music performance told stories of loss and reconciliation but from the perspective of ‘Generation 25’, those born since the genocide or too young to remember it. The standing ovations that erupted at the end of the performance told a story of how young people in urban and modernised Kigali can be engaged to think about the past and its meaning today.

Kwibuka is an emotionally fraught period, when people remember, mourn and miss their loved ones, but it is also an important time of political consolidation and consideration, the government seizing the opportunity to remind their citizens of the official version of Rwandan history, warn against genocide ideology and promote their vision of unity and reconciliation for the country. With a government whose central legitimation for rule is founded in their liberation from the genocide this narrative is important to impart on the entire population.

But as increasing numbers of young people who have no experience of the genocide themselves grow up, it is questionable whether the standard format of commemoration will suffice. Instead, the variety of formats needed to engage this next generation of Rwandans growing up in a society no longer officially defined by ethnic divisionism will likely need to expand and transform. While it will remain important to remember the needs of the survivor population, so that they are afforded a space to remember, mourn and commemorate in ways that are meaningful to them, the government will need to engage the next generation in ways that are significant to them, too, if they want to maintain the legitimacy afforded to them through the liberation of the country from genocide.