The first post of 2020 turns to the Australian continent. Federica Caso reflects on Australia’s memory politics, and argues that settler colonialism is at its core.

In the past four years, my attention has been captured by the Australian way of remembering war. The epicentre of Australia’s war memory is the Australian War Memorial, a magnificent building with an impressive collection and ongoing cultural, commemorative, and research activities. The current Prime Minister of Australia called it “the soul of the nation.” This is an apt description because it encapsulates how, in Australia, war memory is considered to be above politics. Souls are for the transcendental and the spiritual, not for politics! And yet, colonial politics is at the very heart of Australia’s war memory.

Ruby Plains Massacre 1, Rover Thomas. Photo by Federica Caso. This painting represents the ‘Killing Times,’ the colonial massacres in the East Kimberley region of Western Australia from the 1880s to the 1920s.

Individual war memories might transcend politics, but their collectivisation remains anchored in it. My interest in war memory is driven by the consideration that cultural and political institutions endorsing some people’s war memories shapes the political community. Whose memories are represented and how they are retold to the public is an intrinsically political question.

At the core of Australia’s politics of war memory is settler colonialism, the ideological structure which sustains the disavowal of Indigenous sovereignty and hinders self-determination and representation. Indigenous scholar Aileen Moreton-Robinson calls this “white possessive.” War memory in Australia functions to perpetrate the colonial fantasy that colonialism was not too bad and that it is now over anyway.

The exclusion of the Frontier Wars from the War Memorial signals that colonial warfare is not as foundational as 20th Century wars and especially World War I, which is often described as Australia’s baptism of fire. This connotation is derived from the fact that World War I was the first military intervention launched since Australian Federation in 1901 which provided fertile ground to promote a sense of national identity separate from colonial Britain. The national attachment to World War I is remarked by the $32 million invested in the renovation of Memorial’s gallery dedicated to it in 2013. A yet more recent investment of $500 million to renovate Anzac Hall suggests a change of focus towards modern warfare. The exuberant investment is intended to expand the space dedicated to the current wars in Afghanistan and Iraq and the peace operations of the last thirty years. This shows that there is the will to map the evolution of modern warfare, but not to reflect on the history and legacy of past warfare. 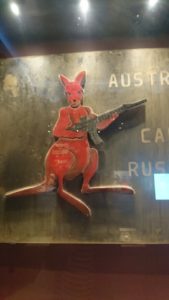 The message that comes across is that the Frontier Wars that have decimated the Indigenous population of Australia and replaced their institutions with Europeans ones are not as foundational as modern warfare. Although modern Australia rests on colonial dispossession, violence, and war, the Memorial’s exclusion of the Frontier Wars and its emphasis on World War I and modern warfare swipes colonialism under the carpet and institutionalises a hierarchy of trauma.

The committed decision to exclude the Frontier Wars from the Australian War Memorial must be understood in relation to the vision to promote a multicultural and post-colonial Australian society, a project that was initiated in the 1970s. The Frontier Wars are perceived as a divisive history insofar as they involve the confrontation of two groups, settler and Indigenous Australians, who are currently presented as reconciled. Participating in the promotion of a vision of a multicultural and post-colonial Australian society, the Australian War Memorial is instead emphasising the inclusion and representation of Indigenous people (as well as people of non-English descent) in the Australia Defence Force.

Certainly it is important that the stories of Indigenous people who served in the Australian Defence Force are told and that Indigenous Service is recognised and included in the Australian War Memorial. However, this is not a substitute for the commemoration of the Frontier Wars. Even conceding that the exclusion of the Frontier Wars from the galleries of the Memorial is intended to promote national unity (rather than entrench colonial relations), it is difficult to imagine how this historical erasure can promote postcolonial transitional justice and peace in Australia.

A permanent exhibition on the Frontier Wars would be an important step towards healing racial relations to the extent that it acknowledges the harm inflicted on Indigenous Australians and dispels the myth that Australia was terra nullius at the time British settlers arrived. It would be a political gesture that signals the will to take responsibility for the violence committed and the desire to move forward reconciling the past rather than swiping it under the carpet.

Federica Caso has recently been awarded her PhD at the University of Queensland. She researches militarisation and the politics of aesthetics